Mildew is also known as ‘downy mildew’ and as the disease spreads, the leaves curl up, necrotise and eventually fall off. The parts of the mycelium that contain the spores of the fungus emerge through the stomata of the plant. In good light it can readily be identified by the gray or purple felt like covering on the back of the leaves.

What is mildew?
The term mildew refers to a group of phytopathogenic fungi that causes diseases in plants.

What can you see? 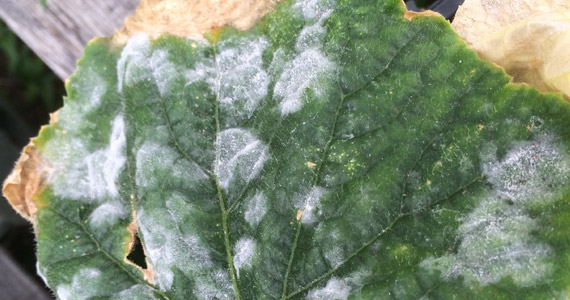 In general, mildew is found on the upper side of the leaf, but there are exceptions. The leaf looks as if it has been dusted with powder.

What can you do?
Keep humidity low and keep your growing area clean. You can also use Hydrogen Peroxide aka Liquid Oxygen to help combat powdery Mildew.

Powdery Mildew is also know as Odium. Before any symptoms become visible the leaf starts to develop blister-like patches, which are followed by the characteristic white powder where the blister was. The leaf looks as if it has been dusted with powder. In general mildew is found on the upper side of the leaf, but there are exceptions. One type of mildew only grows on the underside of the leaf, so it’s no surprise that this often gets overlooked. However, as the disease advances, the leaves can end up being completely covered in this white layer and it can even colonise the buds, with subsequent losses in crop size and quality.

How to prevent the disease?

The best treatment against these types of fungi is prevention; once they have set in and developed, they can become very difficult to eradicate. Try to prevent spores coming in from elsewhere and contaminating your plants by keeping your growing area clean. You can do this by using only clean equipment and washing your hands thoroughly before entering. You can also use Hydrogen Peroxide aka Liquid Oxygen to combat the fungi.

Solutions for controlling the pest

Added to your cart: